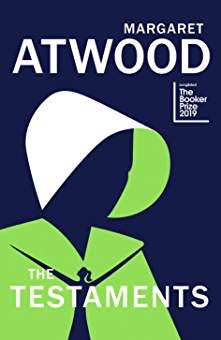 More than fifteen years after the events of The Handmaid’s Tale, the theocratic regime of the Republic of Gilead maintains its grip on power, but there are signs it is beginning to rot from within. At this crucial moment, the lives of three radically different women converge, with potentially explosive results.

Two have grown up as part of the first generation to come of age in the new order. The testimonies of these two young women are joined by a third voice: a woman who wields power through the ruthless accumulation and deployment of secrets.

As Atwood unfolds The Testaments, she opens up the innermost workings of Gilead as each woman is forced to come to terms with who she is, and how far she will go for what she believes.

I first read The Handmaid’s Tale in my higher English class and I wasn’t hugely enamoured by it – probably because we had to analyse it over and over! However, when I reread it as an adult a few years ago – I got what all the fuss was about. I was both nervous and excited about finally reading The Testaments after months of build up and I’m pleased to say that, for me, it lived up to my very high expectations. The last time I remember there being so much excitement and hype about a book’s release was when the Harry Potter books were at their peak and it’s been really lovely to see that a book release can still be such big news!

The Testaments has a different feel to The Handmaid’s Tale in my opinion. The Handmaid’s Tale was quite oblique in a way. It was relentless in it’s harshness but also vague in many areas and it is consistently difficult to decipher exactly who knows what and why. The Testaments is much clearer and much more hopeful. It still portrays the horrors of Gilead but there is the sense that those horrors may be on their way out and that the resistance is stronger. I can see some people finding this more hopeful tone an unwelcome departure from the brutal reality of The Handmaid’s Tale, but if I’m being totally honest I actually really appreciated it. There is so much upheaval and unrest in Britain at the moment and so much depressing news all over the world and it was really good to read a book where I felt like there was a message of resisting tyranny and overthrowing evil.

That is not to say that The Testaments is as straightforward as good versus evil in any way. The best part of the book is that one of the narrators is the fearsome Aunt Lydia and her chapters are frankly incredible. I think it was a master stroke to give such a terrifying character a voice and making the reader genuinely quite uncomfortable as you question what you would do in Gilead. It’s easy to say you would fight against the regime but when it really comes down to it I’m not sure it’s as simple as that at all. Choices are very rarely that black and white – there are always shades of grey in morality.

Overall I think The Testaments is a much more accessible book than it’s predecessor and really quite different in tone but I think it’s a genuinely compelling read. I couldn’t put it down and raced to finish it. The Aunt Lydia sections are compulsively addictive and I could read another whole book just about her. The two other narrators, whilst perhaps not quite as overwhelmingly interesting are still fascinating and flesh out the story beautifully. I don’t think it will please everybody but for me it was a fantastic read!

6 thoughts on “The Testaments by Margaret Atwood – Review”

Hello! I hope everyone is doing ok! It has been so windy and rainy here in Edinburgh today which is a bit rubbish but a good excuse to curl up with a book! Today I’m featuring The Hiding Game by @naomiwoodbooks today which is a really fascinating look at the lives of a group of friends in 1920s Germany at the Bauhaus School of Art. It’s a slow burn which is beautifully written and which I very much enjoyed. My full review is live on my blog now - the link is in my bio and I’ll pop the blurb of the book below! ♥️ @picadorbooks
Hello! I hope you’re all doing ok this week? Today is the UK publication of this fantastic, intense and compelling book - The Echo Wife by @gaileyfrey! I loved this short but seriously impressive book. I don’t want to give away anything much about the plot because I feel with this one it’s better not to know too much going in! I’ll pop the blurb below and my full and spoiler free review is live on my blog now if you fancy giving it a little read! Link is in my bio! ⭐️⭐️⭐️⭐️✨
Yesterday I finished The Survivors by @janeharperauthor as part of the @tandemcollectiveuk #thesurvivorsreadalong! I really enjoyed this one - I am a huge fan of Jane Harper’s books so I had high expectations going in and I’m pleased to say they were very much met! The Survivors is mainly about secrets, lies, trauma and guilt, I feel. The small community aspect works beautifully here, as it does in many books in the genre. It creates an insular feeling as small communities begin to suspect and turn on each other which I just love. We follow main character, Kieran, as he returns to his childhood home with his new family in tow and is pretty much immediately thrown into the middle of a criminal investigation whilst also being constantly reminded of another tragedy over a decade earlier on the night of a now infamous and terrible storm. As ever, Harper is particularly fantastic at building a sense of atmosphere and setting. The location always plays a huge role in her stories. The Survivors also focusses on the relationships and psychological aspects of its characters as opposed to being more of a police procedural which I think works beautifully. I was completely drawn into the lives of these people and I was desperate to know what had happened both in the present and in the deadly storm from years before. I didn’t see the resolution coming at all. I was suspicious of quite a few characters but was knocked sideways by the end reveal. The only thing I am in sort of two minds about is the ending. The book ends pretty abruptly and I was left wanting to find out a little more about the aftermath - mostly because I was enjoying the book so much and just wanted it to go on! However, whilst it did leave me a bit shell shocked, I can’t deny that the ending has a powerful impact in its decisiveness which I admire. Overall, this was yet another brilliant thriller from Harper who has yet to disappoint! I think my favourite book of hers remains The Lost Man which I thought was exceptional but I also loved The Survivors from start to finish and I cannot wait to read whatever Harper writes next! She is absolutely an auto-buy author for me! ⭐️⭐️⭐️⭐️✨
Hello! So, today is my birthday- it’s a weird birthday as I’m sure it has been for everyone in the past year but I’m trying to make this best of it! And not only is it my birthday but it’s also the publication day for the phenomenally good Insatiable by @thedaisybee! I LOVED this book - it is so funny, intelligent and unashamedly explicit about female desire. I’ll pop the summary below! You can read my full review over on my blog! 🍊 Link in bio 🍊
Hello! 🌊 Today my book arrived for the @tandemcollectiveuk #TheSurvivorsReadalong and I cannot wait to get started! I love all of Jane Harper’s books so I have really high hopes for this one! Plus I can’t wait to use the whiteboard supplied to write down clues - so much fun! If you want to join in with the readalong let me know and I’ll send over the prompt cards! 🌊 @littlebrown @janeharperauthor #gifted #thesurvivors
Hello! Hope you’re all having a nice week! Yesterday was the paperback publication day of The Girls I’ve Been by Tess Sharpe which I really enjoyed so I thought I’d feature the gorgeous proof in my photo tonight! I’ll pop the summary down below and my full review will be up on my blog over the next few days! ❤️