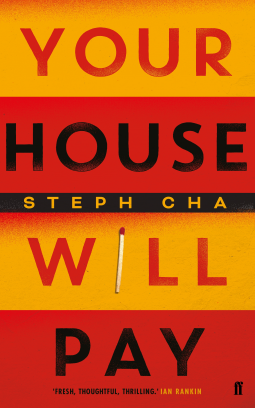 Hello! I hope you are all having a nice weekend? I’ve been doing a bit of work for university and also some reading which has been nice! Then I fell asleep and my power nap turned into a three hour snooze -🤦🏻‍♀️
Hello! I hope everyone is doing ok! It has been so windy and rainy here in Edinburgh today which is a bit rubbish but a good excuse to curl up with a book! Today I’m featuring The Hiding Game by @naomiwoodbooks today which is a really fascinating look at the lives of a group of friends in 1920s Germany at the Bauhaus School of Art. It’s a slow burn which is beautifully written and which I very much enjoyed. My full review is live on my blog now - the link is in my bio and I’ll pop the blurb of the book below! ♥️ @picadorbooks
Hello! I hope you’re all doing ok this week? Today is the UK publication of this fantastic, intense and compelling book - The Echo Wife by @gaileyfrey! I loved this short but seriously impressive book. I don’t want to give away anything much about the plot because I feel with this one it’s better not to know too much going in! I’ll pop the blurb below and my full and spoiler free review is live on my blog now if you fancy giving it a little read! Link is in my bio! ⭐️⭐️⭐️⭐️✨
Yesterday I finished The Survivors by @janeharperauthor as part of the @tandemcollectiveuk #thesurvivorsreadalong! I really enjoyed this one - I am a huge fan of Jane Harper’s books so I had high expectations going in and I’m pleased to say they were very much met! The Survivors is mainly about secrets, lies, trauma and guilt, I feel. The small community aspect works beautifully here, as it does in many books in the genre. It creates an insular feeling as small communities begin to suspect and turn on each other which I just love. We follow main character, Kieran, as he returns to his childhood home with his new family in tow and is pretty much immediately thrown into the middle of a criminal investigation whilst also being constantly reminded of another tragedy over a decade earlier on the night of a now infamous and terrible storm. As ever, Harper is particularly fantastic at building a sense of atmosphere and setting. The location always plays a huge role in her stories. The Survivors also focusses on the relationships and psychological aspects of its characters as opposed to being more of a police procedural which I think works beautifully. I was completely drawn into the lives of these people and I was desperate to know what had happened both in the present and in the deadly storm from years before. I didn’t see the resolution coming at all. I was suspicious of quite a few characters but was knocked sideways by the end reveal. The only thing I am in sort of two minds about is the ending. The book ends pretty abruptly and I was left wanting to find out a little more about the aftermath - mostly because I was enjoying the book so much and just wanted it to go on! However, whilst it did leave me a bit shell shocked, I can’t deny that the ending has a powerful impact in its decisiveness which I admire. Overall, this was yet another brilliant thriller from Harper who has yet to disappoint! I think my favourite book of hers remains The Lost Man which I thought was exceptional but I also loved The Survivors from start to finish and I cannot wait to read whatever Harper writes next! She is absolutely an auto-buy author for me! ⭐️⭐️⭐️⭐️✨
Hello! So, today is my birthday- it’s a weird birthday as I’m sure it has been for everyone in the past year but I’m trying to make this best of it! And not only is it my birthday but it’s also the publication day for the phenomenally good Insatiable by @thedaisybee! I LOVED this book - it is so funny, intelligent and unashamedly explicit about female desire. I’ll pop the summary below! You can read my full review over on my blog! 🍊 Link in bio 🍊
Hello! 🌊 Today my book arrived for the @tandemcollectiveuk #TheSurvivorsReadalong and I cannot wait to get started! I love all of Jane Harper’s books so I have really high hopes for this one! Plus I can’t wait to use the whiteboard supplied to write down clues - so much fun! If you want to join in with the readalong let me know and I’ll send over the prompt cards! 🌊 @littlebrown @janeharperauthor #gifted #thesurvivors