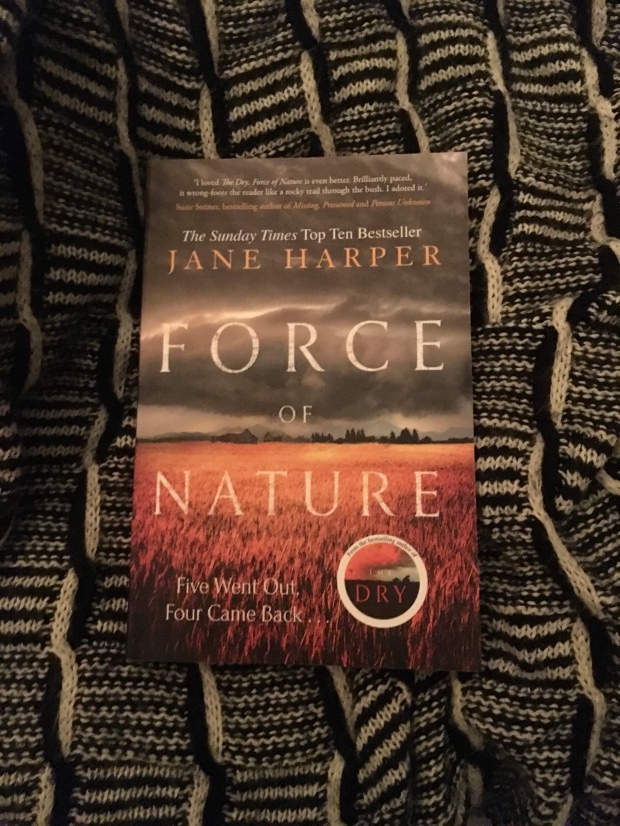 FIVE WENT OUT. FOUR CAME BACK…

Is Alice here? Did she make it? Is she safe? In the chaos, in the night, it was impossible to say which of the four had asked after Alice’s welfare. Later, when everything got worse, each would insist it had been them.

Five women reluctantly pick up their backpacks and start walking along the muddy track. Only four come out the other side.

The hike through the rugged landscape is meant to take the office colleagues out of their air-conditioned comfort zone and teach resilience and team building. At least that is what the corporate retreat website advertises.

Federal Police Agent Aaron Falk has a particularly keen interest in the whereabouts of the missing bushwalker. Alice Russell is the whistleblower in his latest case – and Alice knew secrets. About the company she worked for and the people she worked with.

Far from the hike encouraging teamwork, the women tell Falk a tale of suspicion, violence and disintegrating trust. And as he delves into the disappearance, it seems some dangers may run far deeper than anyone knew.

I really liked Jane Harper’s first novel ‘The Dry’ which I read last year. At the time I had no idea she was planning on writing more novels based around the main character, Aaron Falk, but I am thrilled that she decided to do so. The Dry was a great mystery with such a good build up of intensity throughout and Force of Nature did not disappoint in this department either. What I like about Harper’s writing is her ability to weave an interesting and intriguing story without it ever feeling melodramatic or overdone which I feel can be quite common in crime novels. Force of Nature is definitely not non-stop action, there are a lot of quiet moments but even within these more sedate parts there is an undercurrent of tension and mystery. This subtlety is extremely skilful and makes the novel all the more enjoyable. The main character, Aaron, is interesting because he is always a contemplative figure, he rarely loses his temper and is pretty mild mannered, even unobtrusive. This is, again, quite unusual in these type of books but I think it’s a risk that has paid off. Harper is very good in dealing with her characters, she has a way of making even the unlikeable ones compelling and can always evoke an emotional reaction from her readers.

Something that is hugely prevalent all the way through Force of a Nature is the focus on the often dangerous climate in Australia. The weather was a huge plot point in The Dry as well, and it is used to great affect again in this novel. It is almost as though the weather is a character itself as the intensity of the heat and the cold has such big consequences for the characters. It also gives a fantastic sense of atmosphere that runs throughout the whole novel. Australia is a great setting for this book in part because of the extreme weather that is common there and also because you can tell how knowledgable Harper is about the country in which she lives.

Another great aspect of Force of Nature was the dual narrative. I sometimes find this style slightly irritating as it feels like you are just being drip fed information when all you want is to know everything but it actually worked very well here. The pacing was very good, it’s quite a long book but I read it very quickly and found it gripping from start to finish.

Being completely honest, I still don’t think Force of Nature is quite as good as the author’s debut but that was a very high bar because it really was so great. Despite this, however, I really, really liked this book and would definitely recommend it to anyone who likes a tense and atmospheric read.

One thought on “Force of Nature by Jane Harper – Review”

Two posts in one day - what is wrong with me! 😂 However, I’m also on the blog tour today for the brilliant Wahala by Nikki May which I really enjoyed and flew through in about 48 hours! My review is live over on my blog if you want to go check it out. I just couldn’t resist a photo of this gorgeous cover which is one of my favourites in a while! 💗💚💜 @doubledayukbooks
Today I’m kicking off the blog tour for the fantastic The Girl She Was by Alafair Burke! I loved this one! @faberbooks.
Hi everyone! I hope you all had the loveliest Christmas possible! I had a really nice time, if a little hectic (3 dogs including 2 puppies all in one house)!
It’s not Christmas without the Irn Bru Snowman advert! 🎄😂🎄I hope you’re all doing ok? This is a pretty stressy Christmas as I feel like everyone is getting struck down with covid but fingers crossed we can all somehow still manage to enjoy Christmas Day🤞
So excited to receive this gorgeous paperback version of one of my top books of the year - The First Day of Spring By @nancycntucker! Huge thank you to @tandemcollectiveuk and @hutchheinemann @penguinukbooks ❤️ [Gifted/Ad/ReviewCopy]
Hello! Today is my stop on the blog tour for The Newcomer by Laura Elizabeth Woollett! @scribe_uk 🧡