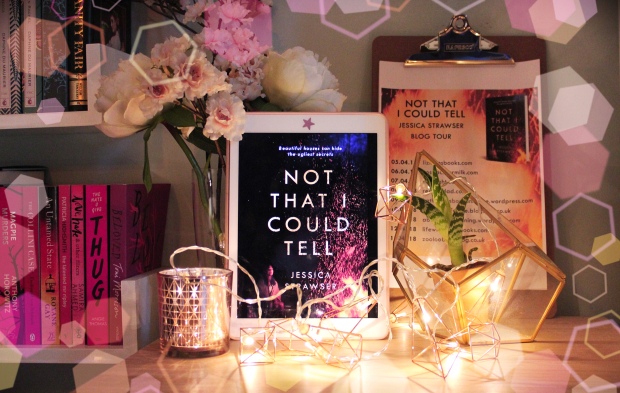 Title: Not That I Could Tell

When a group of neighborhood women gathers, wine in hand, around a fire pit where their backyards meet one Saturday night, most of them are just ecstatic to have discovered that their baby monitors reach that far. It’s a rare kid-free night, and they’re giddy with it. They drink too much, and the conversation turns personal.

By Monday morning, one of them is gone.

Everyone knows something about everyone else in the quirky small Ohio town of Yellow Springs, but no one can make sense of the disappearance. Kristin was a sociable twin mom, college administrator, and doctor’s wife who didn’t seem all that bothered by her impending divorce—and the investigation turns up more questions than answers, with her husband, Paul, at the center. For her closest neighbor, Clara, the incident triggers memories she thought she’d put behind her—and when she’s unable to extract herself from the widening circle of scrutiny, her own suspicions quickly grow. But the neighborhood’s newest addition, Izzy, is determined not to jump to any conclusions—especially since she’s dealing with a crisis of her own.

As the police investigation goes from a media circus to a cold case, the neighbors are forced to reexamine what’s going on behind their own closed doors—and to ask how well anyone really knows anyone else.

This book drew me in with the first chapter and despite not being overly fast paced it held my attention completely until the end. I have heard a lot of comparisons likening Not That I Could Tell to Desperate Housewives and Big Little Lies and it definitely does have a similar sort of feel to it in the sense that it is in part about a small group of women supporting one another whilst also keeping secrets from each other. It is also about the darkness hiding behind the glossy veneer of suburbia which is a topic I find endlessly fascinating.

The narrative is mostly split between two of the women, Clara and Izzy, with occasional short interludes presumably from Kristin. Both of the characters have a clear and separate voice and personality with different motivations and secrets in their pasts. The author doesn’t give much away up front instead leaving tantalising hints throughout. I enjoyed Clara’s sections the most, I liked her character and found her enjoyable to follow. I didn’t immediately like Izzy’s sections as much but she actually grew on me a lot throughout the novel. All of the characters were interesting, the author doesn’t give too much away about any of them which keeps the air of mystery surrounding the community ever-present.

One of the strongest parts of Not That I Could Tell was it’s focus on friendship. It makes the reader question how well we really know the people we ostensibly call friends. Often with neighbours there is a feeling of amiability but without really wanting to know about the intimate aspects of their lives, almost as if we make a conscious decision to not be able to tell if something is really wrong. The title of the book sums up that feeling perfectly, because when someone outside the community questions the women who supposedly know Kristin the best, all they can really say when asked if she was scared of something is ‘Not That I Could Tell’.

Overall, I really enjoyed reading this book. It is not an action-filled story full of huge twists and turns, instead it is more of a quiet look at friendship and community. I mostly guessed where the story was headed but that doesn’t bother me if I enjoy the journey getting there which in this case I did. There was a little twist at the end which was a nice touch and gave some closure to the reader. If you are looking for an enjoyable, quick read about an interesting community of characters then Not That I Could Tell is a really good choice.

I received this e-book from Netgalley in exchange for an honest review.

Check out the rest of the blog tour information below!

Today is my stop on the blog tour for 𝔸𝕗𝕥𝕖𝕣 𝔻𝕒𝕣𝕜 𝕓𝕪 𝕁𝕒𝕪𝕟𝕖 ℂ𝕠𝕨𝕚𝕖! Read on for my thoughts on this thought provoking book! 💙 Thank you to Laura at @penguinukbooks @centurybooksuk for having me on the tour and this lovely proof copy! 𝙰𝚍 𝚙𝚛 𝚙𝚛𝚘𝚍𝚞𝚌𝚝 💙
Today’s is my stop on the blog tour for the absolutely fantastic 𝑳𝒊𝒕𝒕𝒍𝒆 𝑺𝒊𝒔𝒕𝒆𝒓 by @gythalodge! Read on for my thoughts on this propulsive thriller! Huge thanks to @kalliereads and @michaeljbooks for having me on the tour and the gorgeous hardback! 𝔸𝕕 𝕡𝕣 𝕡𝕣𝕠𝕕𝕦𝕔𝕥
Hello! Today I’m featuring the stunning Elektra by @jennifer.saint.author which was one of my most anticipated reads of 2022 and it totally lived up to my high expectations! @headlinebooks Massive thank you to @caitlinraynor for the proof - I obviously had to buy this gorgeous hardback version too though - I could not resist! 😍
This little cutie enjoyed making the Ultimate Brown Butter Choc Chip Cookies from Breadsong with me! Sadly since dogs can’t eat chocolate she couldn’t sample them but she enjoyed the process! 😂🍪😂 Check out my reel of the cookie making process and end result in my previous post! 𝔸𝕕 𝕡𝕣 𝕡𝕣𝕠𝕕𝕦𝕔𝕥 🍪🍪🍪
Happy Publication Day to Wrong Place Wrong Time by @gillianmauthor! I’m hoping to start this next week - it’s one I’ve been looking forward to for a while now! ⏰ @michaeljbooks ⏰ 𝔸𝕕 𝕡𝕣 𝕡𝕣𝕠𝕕𝕦𝕔𝕥
Hi everyone! I’m so excited to be taking part in the @tandemcollectiveuk readalong/bakealong of Breadsong by @kittytaitbaker this #mentalhealthawarenessweek. I’m a fan of all things in the bread/cake/biscuit/pastry area (who isn’t? 😂) so suffice to say I’m looking forward to trying the recipes in this gorgeous looking book which is also Kitty Tait’s personal story. 🧡🍞🧡 Huge thanks to @bloomsburycooks @tandemcollectiveuk 🧡🍞🧡 𝔸𝕕 𝕡𝕣 𝕡𝕣𝕠𝕕𝕦𝕔𝕥