Title: That’s Not What Happened 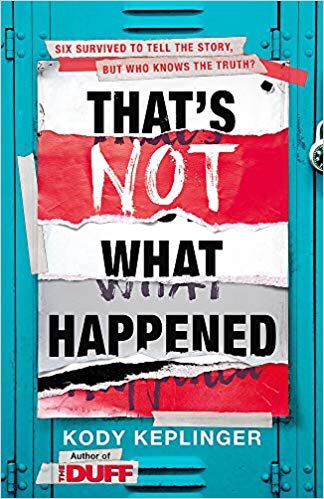 It’s been three years since the Virgil County High School Massacre. Three years since my best friend, Sarah, was killed in a bathroom stall during the mass shooting. Everyone knows Sarah’s story – that she died proclaiming her faith.

But it’s not true.

I know because I was with her when she died. I didn’t say anything then, and people got hurt because of it. Now Sarah’s parents are publishing a book about her, so this might be my last chance to set the record straight . . . but I’m not the only survivor with a story to tell about what did – and didn’t – happen that day.

Except Sarah’s martyrdom is important to a lot of people, people who don’t take kindly to what I’m trying to do. And the more I learn, the less certain I am about what’s right. I don’t know what will be worse: the guilt of staying silent or the consequences of speaking up . . .

The topic of school shootings is always going to be a difficult subject to read about because they are such a terrifying and tragic event for the people involved. So I knew this book would most likely be an emotional read, which it was. I don’t think it’s perfect by any stretch but what I really liked about That’s Not What Happened is that it’s focus was 100% on the victims and survivors and not on the perpetrator. He is not who the story is about – in fact his name is blacked out on the few occasions he is mentioned. I thought that was an excellent decision from Keplinger because it takes some of the power away from the shooter and gives a voice to the people who are most affected by the massacre.

The story is narrated in the form of a long letter from one of the survivors, Leanne. Her best friend, who died in the shooting, has been lauded as a religious martyr because of a story of her death that the media jumped on in the wake of the massacre. The problem is that the story is not true and only a couple of people know the real story. That’s Not What Happened follows Leanne as she tries to bring together all of the survivors personal stories and show who they really are, rather than who the media and community want them to be. Obviously due to the plot this book does contain a lot about religion which can often be controversial and difficult to talk about. I though that the author was pretty even-handed in her approach to religion. She neither denigrates or promotes it but rather shows how it can be a force of both good and bad.

I found That’s Not What Happened a really interesting read. The characters are full of shades of grey which feels authentic. I liked Leanne but also disagreed with some of her actions and I think that is kind of the point of the book: That we can never really know exactly why people think and do the things they do and that everyone has the right to tell their own story.

Overall I think this book is very much worth reading. Occasionally I found it slightly hard to relate to some of the characters as much as I wanted to but I do think the story is hugely important and that it will appeal to young adults as a timely and provocative read.

I received an e-arc of the book from Netgalley. My review is my own honest opinion.