Title: Dead In The Water 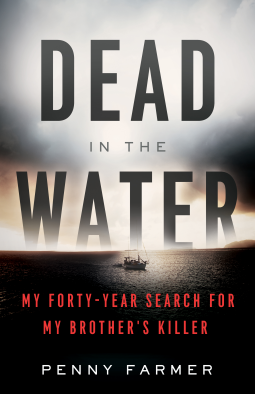 In 1978, two tortured corpses—hooded, bound, and weighted down with engine parts—were found in the sea off Guatemala. Junior doctor Chris Farmer and his girlfriend, Peta Frampton, were still clinging to life when they were thrown from the yacht they’d been crewing.

Here is the gripping account of how Chris’s family worked alongside police, the FBI, and Interpol to gather evidence against the boat’s Californian skipper, Silas Duane Boston. Almost four decades later, in 2015, Chris’s sister, Penny, used Facebook to track down Boston. Following the detailed, haunting testimony of his own two sons—who also implicated their father in a string of other killings—Boston was finally arrested and charged with two counts of maritime murder.

I’ve been meaning to read this one for ages so I’m glad to have finally gotten around to it. It’s a true crime book which covers the long search for justice after the brutal murder of a young couple travelling together. I always think there’s something different about true crime written by the victim’s family as is the case here (Dead In The Water is written by the male victim, Chris’, sister). When the story is told by the family it just feels so much more raw and forces the reader to face the true cost of taking a life. A book written by a reporter, author or prosecutor, whilst fascinating in other ways, can never really demonstrate how completely a murder can affect so many people and how it is a never-ending struggle with grief for the victim’s friends and family.

Something which I found particularly interesting and shocking whilst reading Dead In The Water are the difficulties surrounding jurisdiction and all the different authorities causing so many complications and in many ways allowing a terrible person to escape justice for an unthinkably long time. It really is a shocking story with so many facets to it. I really liked that the author also looked at the impact on the killers family which is sometimes a touch overlooked in true crime but it helped to understand how these extraordinary and incredibly unfair and tragic circumstances arose.

Overall I think Dead In The Water is a complex and genuinely heartbreaking story which has so many twists and turns that it almost seems unreal. Sadly, the story is very real and the loss of life it explains is so terribly sad. The author has shown what sort of people Chris and Peta were and the strength and determination her family have managed to sustain is mightily impressive. I would absolutely recommend this one.

One thought on “Dead In The Water by Penny Farmer – Review”