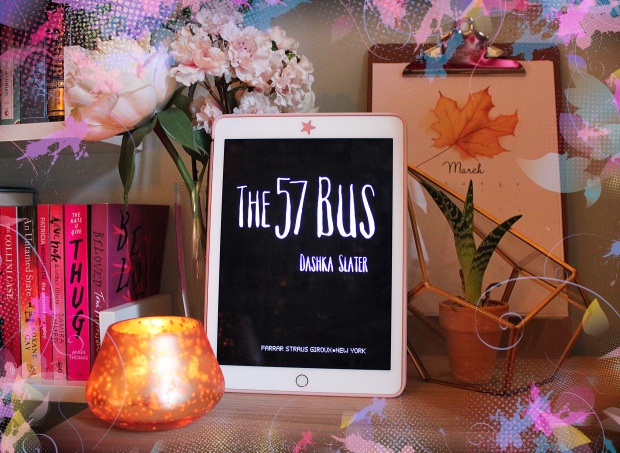 One teenager in a skirt.
One teenager with a lighter.
One moment that changes both of their lives forever.

If it weren’t for the 57 bus, Sasha and Richard never would have met. Both were high school students from Oakland, California, one of the most diverse cities in the country, but they inhabited different worlds. Sasha, a white teen, lived in the middle-class foothills and attended a small private school. Richard, a black teen, lived in the crime-plagued flatlands and attended a large public one. Each day, their paths overlapped for a mere eight minutes. But one afternoon on the bus ride home from school, a single reckless act left Sasha severely burned, and Richard charged with two hate crimes and facing life imprisonment. The case garnered international attention, thrusting both teenagers into the spotlight.

This book wasn’t quite what I expected, I had thought it was fiction based on real events, but it was actually more like young adult non-fiction. The events it described were put across plainly and without embellishment or bias. The author has taken great care to obtain information and testimony of sorts from all of the people involved in the incident and has researched the legal implications and history very thoroughly. I liked the way this book was written, the chapters were all relatively brief and in different forms. Some chapters were reports from the people involved, some were text conversations and some police interviews. This structure took a little getting used to but then gave a very coherent and detailed overall picture and enables the reader to see the incident from every angle possible.

I learned so much from reading The 57 Bus about the way society views gender and those who don’t conform to the societal norm. There were so many things I simply hadn’t considered about how complicated it must be for people like the victim in this crime. I found all the information about which pronoun to use when talking about or addressing someone who does not identify as simply male or female so fascinating and informative. This book is so important, in my opinion, for teaching young people about tolerance and the importance of the words we use in relation to the people in our society. I also learned a great deal about the criminal justice system in the US and how it deals with young people. There was so much important and shocking information to process whilst reading. I live in the United Kingdom and so geographically I am far away from where these events took place, however the issues discussed are of great importance to the world as a whole and should be taken as such.

I think one of the strengths of this book is that the author takes great care to explain the backgrounds and different lives of both the vicim and the perpetrator. Knowing about their lives before the incident gives the reader so much more context for understanding what happened and why it happened. It also explains the reasons for certain mindsets of ignorance and a lack of understanding about people seen as different. The author is very even handed, she doesn’t understate the horrific nature of the crime or the painful consequences but also doesn’t turn the perpetrator into a one dimensional villain. It is this skill that makes this book both necessary and important. I would definitely recommend it to anyone who wishes to learn more about how to avoid stereotypes and how to be fair and just to everyone in the world we live in.

I received this book from Netgalley in exchange for an honest review.

One thought on “The 57 Bus by Dashka Slater – Review”