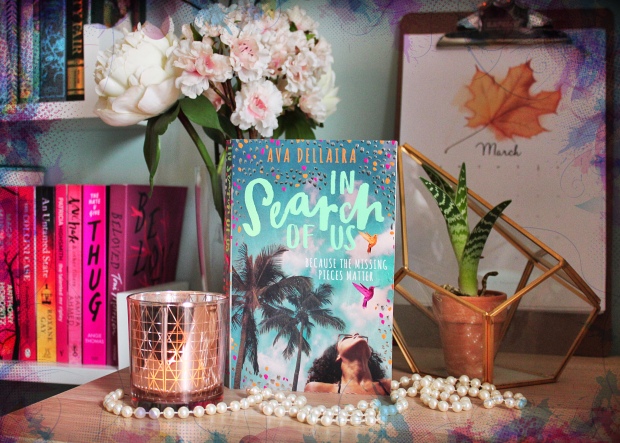 Title: In Search Of Us

The author of the beloved Love Letters to the Dead returns with a parallel story of a mother and daughter each at age seventeen. Marilyn’s tale recounts the summer she fell in love and set out on her own path. Angie’s story is about her search for her unknown father.

This sweeping multi-generational love story introduces readers to mother-and-daughter pair Marilyn and Angie. To seventeen-year-old Angie, who is mixed-race, Marilyn is her hardworking, devoted white single mother. But Marilyn was once young, too. When Marilyn was seventeen, she fell in love with Angie’s father, James, who was African-American. But Angie’s never met him, and Marilyn has always told her he died before she was born. When Angie discovers evidence of an uncle she’s never met she starts to wonder: What if her dad is still alive, too? So she sets off on a journey to find him, hitching a ride to LA from her home in New Mexico with her ex-boyfriend, Sam. Along the way, she uncovers some hard truths about herself, her mother, and what truly happened to her father.

This book is a charming emotional story about the intensity of first love and the strong bond between mothers and daughters. The book is split into alternating sections, one from Angie’s point of view in the present and the other is her mother, Marilyn’s story set eighteen years earlier. This dual narrative works pretty well, both are interesting and have slightly different tones to them which helps differentiate between the two. Personally I preferred Marilyn’s sections slightly more than Angie’s. I felt that the Los Angeles setting was evocative and Marilyn’s story of falling in love and growing up had more emotional depth. However both narratives were well written and tied together nicely in the end.

A big part of this story is music, in both narratives the music the characters listen to and connect with seems to be of great importance to the story. The music also helps strengthen the setting and the different time periods. Even though Marilyn’s sections are set in the late 90’s which, to me at least, seems quite recent it is actually a very different time and the music is the perfect way to highlight this. It also makes the story seem more realistic and evokes many different feelings whilst the events of the novel take place.

Both of the narratives are about that time in a young person’s life when they are just on the cusp of adulthood. This gives a hopeful, excited and yet anxious tone to the book. The author captured the feeling of starting to grow up and yet being scared to do so very well. She also managed to show the importance of first love and how huge an impact this relationship can have on a young woman. Occasionally I felt my interest wavering slightly and I sometimes felt the book was a little cliché concerning romance. This is not necessarily a problem for everyone reading the book, it is a young adult novel and at times I felt that very strongly. This is a problem I have whilst reading YA, sometimes the book just feels aimed at someone a decade younger than me and I find it almost a little simplistic and sometimes a book feels like it is of just as much importance for all ages and can resonate with everyone. In Search Of Us feels for me, a great read for young people in their late teens who are experiencing many of the same emotions as the characters in the story and just might not resonate quite as strongly with slightly older adults.

Overall I feel this is a well written and strong novel with a mostly interesting plot. One of its biggest strengths is the way the author portrays the complicated relationship between mothers and daughters. She shows the power of that relationship and how far they are willing to go for each other. The book can at times feel ever so slightly cheesy and I felt the ending was a little rushed but I think it works well for the book’s intended audience and was an entertaining quick read.

I received this book from Readers First in exchange for an honest review.