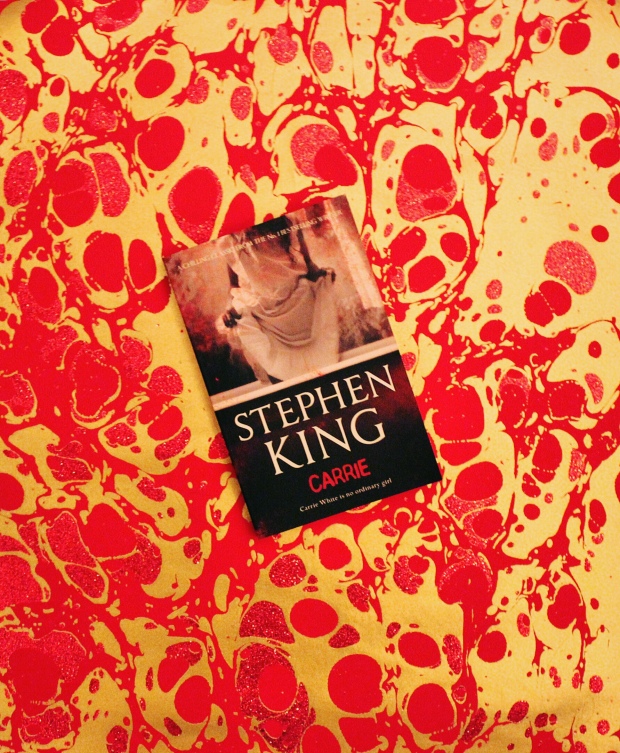 Carrie White is no ordinary girl.

Carrie White has the gift of telekinesis.

To be invited to Prom Night by Tommy Ross is a dream come true for Carrie – the first
step towards social acceptance by her high school colleagues.

But events will take a decidedly macabre turn on that horrifying and endless night as she
is forced to exercise her terrible gift on the town that mocks and loathes her . . .

I read my first Stephen King book, The Outsider, earlier this year and really enjoyed it. So I wanted to start tackling some of his extensive back catalogue and I decided to begin with Carrie mostly because it is a story that has always intrigued me. It’s a relatively short book, especially by King’s standards, so I finished it in a couple of days and it definitely packed a punch.

Firstly, I have to say that the language and dialogue in Carrie is understandably a little dated. The novel was first published in the 1970s so it is to be expected that some aspects of the story don’t exactly feel current but I was also surprised by how much of it did actually feel quite relevant. The cruelty that teenagers are capable of is well documented in fiction and in reality and it always manages to shock me. If I’m being totally honest I did feel that in Carrie, King places a great deal of blame on girls in the story. Of course teenage girls can be cruel but so can teenage boys, sometimes more so and I just felt that wasn’t made as clear as it could have been. The strongest emotion I felt reading this book was overwhelming sympathy for it’s titular character. King’s brutal writing makes the reader feel horror at the way Carrie is continuously mocked and humiliated but also puts the reader in the uncomfortable position of making them question whether they would have stepped in and done something to help Carrie when they were a teenager. The book is written in an unusual and effective manner with alternating points of view as well as book/journal excerpts and police interviews. This structure gives a wide spectrum of conflicting opinions which works hugely in the book’s favour.

Overall, I thoroughly enjoyed reading Carrie. King’s writing is so engaging and biting, the characters are fascinating and the ending leaves a lasting impact. I’m definitely looking forward to reading more of King’s work. I’m not sure which one to try next so if you have any recommendations then please fire away in the comments!

Today was my stop on the blog tour for the exceptional Nothing I Wouldn’t Do by @saraellaozbek! I loved her first book and with this one Ozbek has cemented herself as an auto-buy author for me! I love the way she writes! Head over to my blog to read my full review of the fantastic Nothing I Wouldn’t Do - link in my bio! ❤️💗❤️ @randomthingstours @simonschusteruk ❤️💗❤️ [Ad / Gifted / Review Copy]
Today I’m featuring the stunning Conversations on Love by @natashachloelunn @vikingbooksuk. Check out my review below which is also live over on my blog - link in bio! Swipe for the book’s summary! 💙❤️💙
Today I’m part of the blog tour for the brilliant My Best Friend’s Secret by @emilyfreud_ which I loved! Check out my review below and swipe for the book summary! 🧡 Thank you to Joe at @quercusbooks for having me on the tour 🧡
Hello! There are so many awesome books out today and I’ll try to feature them over the next few days! One of the books out today that I’m planning on reading very soon is The Lock In by @phoebeluckhurst! I’ll pop the summary below - it is such a fun premise and I’ve heard so many good things about it! I can’t wait to start - I think it’ll be an excellent summer read! ☀️ @michaeljbooks ☀️
Today I’m featuring the fantastic The Wedding Night by @_harrywalker1! @hodderbooks 🧡
Today is my stop on the blog tour for the compelling KYIV by Graham Hurley! Thank you so much to Lauren at @headofzeus for having me on the tour! 💙