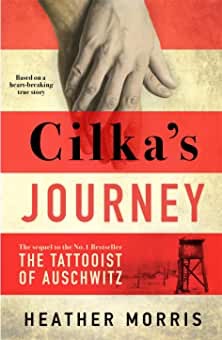 n 1942 Cilka Klein is just sixteen years old when she is taken to Auschwitz-Birkenau Concentration Camp. The Commandant at Birkenau, Schwarzhuber, notices her long beautiful hair, and forces her separation from the other women prisoners. Cilka learns quickly that power, even unwillingly given, equals survival.

After liberation, Cilka is charged as a collaborator by the Russians and sent to a desolate, brutal prison camp in Siberia known as Vorkuta, inside the Arctic Circle. Innocent, imprisoned once again, Cilka faces challenges both new and horribly familiar, each day a battle for survival. Cilka befriends a woman doctor, and learns to nurse the ill in the camp, struggling to care for them under unimaginable conditions. And when she tends to a man called Alexandr, Cilka finds that despite everything, there is room in her heart for love.

Based on what is known of Cilka Klein’s time in Auschwitz, and on the experience of women in Siberian prison camps, Cilka’s Journey is the breathtaking sequel to The Tattooist of Auschwitz.

The Tattooist of Auschwitz was one of my favourite books of last year and Cilka, a side character in Lale’s story, is someone who I instantly wanted to know more about. She is sent to Auschwitz at age 16 and is set apart by one of the commandants because of her beauty. She is abused by this monster during her time at the concentration camp and anyone who classifies what she went through as anything other than rape is frankly wrong. However after the Soviets have liberated the camp, Cilka is arrested and charged as a Nazi collaborator. She is then sent to a prison camp in Siberia. Even though I knew this is what happened to her, I was still in shock. It is such a horrendous miscarriage of justice that a teenager – who did nothing other than survive in one of the most horrific places in human history – could possibly be called anything other than a very brave woman. It makes me genuinely angry and from the first page I was willing Cilka to survive.

The author tells us at the start of the book that it is a work of fiction based upon what she has uncovered about the real Cilka. Whilst we obviously cannot know the exact way Cilka’s day to day life unfolded, I think her strength and resilience is undeniable from what we do know. What Morris has done here is give Cilka’s story a humanity in a manner that makes it impossible not to root for her to escape her disgracefully unjust circumstances.Throughout the book I just kept marvelling at her ability to maintain her dignity and generosity in any situation, no matter how terrible. She manages to help so many others and yet doesn’t seem to recognise her own innate goodness. I think books like this often make the reader consider how they would react if they were in that situation and I can’t even begin to comprehend how I would survive.

Cilka’s Journey is not a cheerful book. It couldn’t possibly be, given the subject matter. However, it is never depressing or without some form of hope. It is a book that truly demonstrates the strength of human connection and the importance of small kindnesses in brutal conditions. If you loved The Tattooist of Auschwitz then you will love Cilka’s Journey too, and I’m sure new readers will be just as affected by this remarkable story.

Hello! I hope you’re all having a lovely weekend! I got this very exciting #bookmail this week - Watersong by Clarissa Goenawan which is out 19th July 2022 and sounds fantastic! Huge thank you to @scribe_uk for sending this beautiful proof! 💧𝙰𝚍 𝚙𝚛 𝚙𝚛𝚘𝚍𝚞𝚌𝚝 💧
Today I’m featuring the stunning 𝐕𝐥𝐚𝐝𝐢𝐦𝐢𝐫 𝐛𝐲 𝐉𝐮𝐥𝐢𝐚 𝐌𝐚𝐲 𝐉𝐨𝐧𝐚𝐬 which was published yesterday and which I genuinely could not love more if I tried! 💕Huge thanks to @blackbookbitch @picadorbooks for sending me this beautiful proof! Ad or product 💕
Happy Publication Day to the thrilling The Island by Adrian McKinty! I absolutely loved this tense thriller - read on for my thoughts! 🖤 Huge thanks to @alainnageorgiou for this lovely proof! @orionbooks 𝔸𝕕 𝕡𝕣 𝕡𝕣𝕠𝕕𝕦𝕔𝕥 🖤
Today I’m on the blog tour for the deeply compelling The Daughter by @lizwebbauthor! 💙 Huge thank you to @richardson_helen for the blog tour invite and for the proof copy! @allisonandbusby 💙 𝔸𝕕 𝕡𝕣 𝕡𝕣𝕠𝕕𝕦𝕔𝕥
Hello! Today I’m featuring one of my top books of 2022 - Young Women by @ms_jessica_moor! I was lucky enough to be part of a group that read this phenomenal book early with @tandemcollectiveuk and I absolutely loved it. It is everything I was hoping for, based on how hugely impressed I was by Moor’s debut Keeper, and more. Young Women is so smart, insightful, sharp, timely and undeniably thought provoking. I could not recommend it more highly and I know it’s going to be one of THE books of 2022! Young Women is out 26th May 2022! @tandemcollectiveuk and @manilla_press were also kind enough to send the pictured goodies including two of my favourite things in the world - notebooks and tote bags! It was so generous of them so massive thank you to them! 💕💕💕 𝔸𝕕 𝕡𝕣 𝕡𝕣𝕠𝕕𝕦𝕔𝕥
Hello! I hope you’re all having a lovely Sunday! I’m featuring the brilliant A Tidy Ending by @drjocannon today which I was part of the blog tour for earlier this month! It’s a fantastic and addictive read that I absolutely loved. Beware of the deceptively cheery cover - it’s a lot more twisted than it looks! I would highly recommend it if you’re looking for a slightly more edgy summer read! 🌼@boroughpress 𝙰𝚍 𝚙𝚛 𝚙𝚛𝚘𝚍𝚞𝚌𝚝 🌼