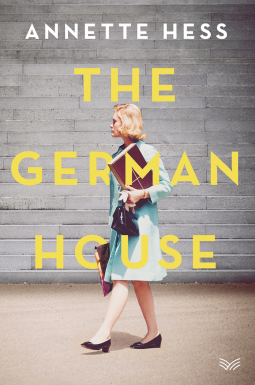 What if everything your family ever told you was a lie?

Frankfurt, 1963 At the war’s end, Frankfurt was a smoldering ruin, severely damaged by the Allied bombings. But that was two decades ago. Now it is 1963, and the city’s streets, once cratered are smooth and paved. Shiny new stores replace scorched rubble. For twenty-four-year-old Eva Bruhn, World War II is a foggy childhood memory. Eager for her wealthy suitor, Jürgen Schoorman, to propose, Eva dreams of starting a new life away from her parents and sister. But Eva’s plans are turned upside down when an American investigator, David Miller, hires her as a translator for a war crimes trial. As she becomes more and more involved in the Frankfurt Trials, Eva begins to question her family’s silence on the war and her future. Why do her parents refuse to talk about what happened? What are they hiding? Does she really love Jürgen and will she be happy as a housewife? Though it means going against the wishes of her family and her lover, Eva, propelled by her own conscience, joins a team of fiery prosecutors determined to bring the Nazis to justice—a decision that will help change her country forever.

I’ve seen this book floating around Bookstagram a lot lately and it really intrigued me so I decided to give it a go. It is translated from the German and I usually really enjoy reading works of translation as I feel it brings something different to my reading life. The German House is a kind of coming of age story of a young woman named Eva living in 1960’s Germany who becomes involved in a war trial. The time period is particularly interesting. It is not the immediate aftermath of World War Two, however, it is not so far into the future that the ramifications are not still being felt.

It took me quite a while to properly get into The German House, truth be told, in part due to the narrative jumping around a lot. The point of view changes throughout with no chapter break or indication that the person we are following has changed. This isn’t something I’ve really come across in a book before and it did get a little confusing from time to time. Despite this confusion there was also a lot I liked about this book. It is a compelling story and following the trials is both heartbreaking and fascinating. Eva has a great deal of naivety concerning the war and her lack of knowledge leaves the reader kind of in the dark as well which creates a real sense of growing tension throughout. As Eva learns more about both her country’s history and her own personal history the extremely complex issue of complicity is brought to the foreground. The question of responsibility and where it should lie is intertwined with Eva’s realisation that she is not as far removed from the war as she at first seems to believe.

My feelings about this book are mixed. I found the process of the trials and Eva’s relationship with both her family and with the people involved in the trials really engaging and interesting. However Eva’s romance with her fiancee, Jurgen, left me cold and the narrative switching point of view rather frequently did slightly take me out of the story. The German House has an unusual perspective on a subject that has been the focus of millions of books and is therefore, in my opinion, very worth reading despite some problems.

I received an e-arc of this book through Netgalley. My review is my own honest opinion.