Title: We Begin at the End 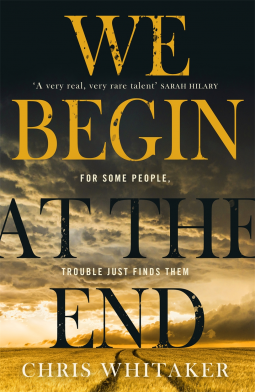 For some people, trouble just finds them. Thirty years ago, Vincent King became a killer. Now, he’s been released from prison and is back in his hometown of Cape Haven, California.

Not everyone is pleased to see him. Like Star Radley, his ex-girlfriend, and sister of the girl he killed. Duchess Radley, Star’s thirteen-year-old daughter, is part-carer, part-protector to her younger brother, Robin – and to her deeply troubled mother.

But in trying to protect Star, Duchess inadvertently sets off a chain of events that will have tragic consequences not only for her family, but also the whole town. Murder, revenge, retribution.

How far can we run from the past when the past seems doomed to repeat itself?

I am such a huge fan of Chris Whitaker. I have read both his previous novels and count All The Wicked Girls as one of my favourite books of all time so I was extremely excited to read his latest – We Begin At The End. The story follows the Cape Haven Police Chief whose childhood best friend has just been released from prison after thirty years for killing his girlfriend’s sister. This is the starting point for a whole series of events primarily involving the young Duchess Radley, daughter of Star Radley, who begins a sequence of events that affects every character in this intense and unflinching book.

I don’t want to give much away about the story but what I can say is that I absolutely loved this book. My expectations were very high and they were exceeded. Whitaker is so talented at creating characters that will just grab you by the heart and not let go. I was so engrossed and invested in Duchess and her little brother, Robin, whose journey through everything that happens in We Begin at the End is heartbreaking and compelling. Duchess is a tough, uncompromising, often downright rude character and yet I was one hundred percent on her side at all times. Her life has been so challenging and frequently brutal and yet she has an unyielding love and loyalty for her little brother who she protects at all costs.

There is a lot of darkness in this book, it shows the pain and unfairness that is unfortunately present in too many lives. However there is also goodness and hope that some people just have innately within them which stops the gritty realism of the story from being completely overwhelming. Whitaker creates atmosphere in such a beautiful way in We Begin at the End and managed to surprise me with twists I absolutely did not see coming which then made total sense as they happened. This is a phenomenally good book which I can not recommend enough.