A psychological thriller set in the Luberon, a touristic French region that evokes holidays in magnificent pool-adorned villas. For those who live there year-round, it often means stifling poverty and boredom. Two teenage sisters have grown up in a world where the main distractions are hatred of Arabs and booze. When Celine, 16, discovers she is pregnant and refuses to divulge her lover’s identity, her father embarks on a mission of revenge. A dark and upsetting account of an ailing society, filled with silent and murderous rage.

I love psychological thrillers so I was really excited to read Summer of Reckoning. The story follows two teenage sisters during an intense, scorching summer in a region of France that exemplifies the extreme contrast between the rural poverty and rich tourist industry. The elder sister, Celine’s, surprise pregnancy sets a series of events in motion that expose the insidious underbelly of rage and racism that lies beneath the surface of many of the characters in this book – in particular, Celine’s father, Manuel.

This is a slim but hugely impactful novel of judgement, societal pressure and a simmering discontent that is skilfully observed and examined by the author. There is an oppressive feeling to the book that makes the reader feel like they are experiencing the intense summer heat and an atmosphere that feels charged with violence and anger. The chapters are mostly short and snappy in a way that throws us straight into the situation and it works beautifully in keeping the reader engrossed as more and more information about these characters comes to light.

There is no veneer of glamour to be found in Summer of Reckoning, it is gritty and brutal  which gives it a sense of realism and authenticity. However, despite the often depressing nature of the story, the author writes in such an insightful manner, creating beautiful prose and memorable imagery that lingers in the mind long after finishing the book. Thoroughly recommend.

Thank you to Anne Cater of Random Things Tours for the blog tour invitation. I received a copy of the book from the publisher. My review is my own honest opinion. 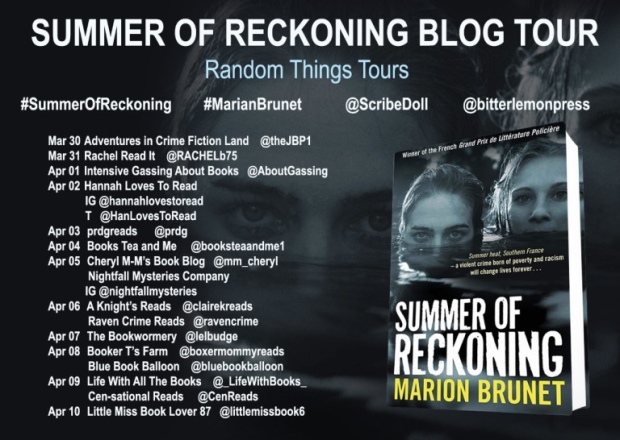