Title: What If It’s Us 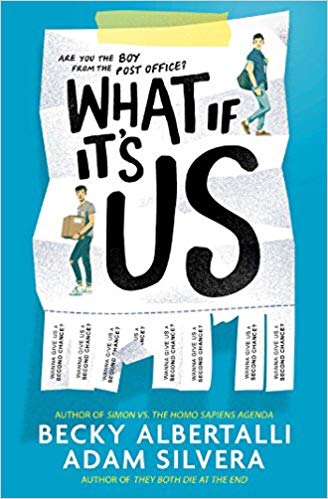 ARTHUR is only in New York for the summer, but if Broadway has taught him anything, it’s that the universe can deliver a showstopping romance when you least expect it.
BEN thinks the universe needs to mind its business. If the universe had his back, he wouldn’t be carrying a box of his ex-boyfriend’s things.

But when the boys have a chance meeting at the post office, they leave wondering what exactly the universe does have in store for them.

What if – in a city of eight million people – they can’t find each other again?

What if they do … and then can’t nail a first date even after three do-overs?

What if Arthur tries too hard to make it work and Ben doesn’t try hard enough?

What if life really isn’t like a Broadway play?

But what if it is?

I was quite excited to read this book because I really enjoyed Simon Vs. The Homo Sapiens Agenda by Becky Albertalli and I’d heard lots of good things about Adam Silvera’s books. My expectations were pretty high which may have been the reason What If It’s Us fell a little flat for me. I certainly didn’t hate it, it was an enjoyable read, but I found myself not feeling particularly attached to any of the characters. I really wanted to love it and unfortunately I just didn’t.

The story follows Arthur and Ben through the many stages of their relationship but if I’m being honest, by the end I wasn’t that invested in their romance. I liked them both as characters but I also found them a tad moany and annoying at times. I do feel like I’m perhaps being a little harsh because cutesy romance is so not my thing unless it’s unbelievably well done so I’m not an easy person to win over in this specific genre. To be fair, there were also things I did really like about What If It’s Us. I loved all the references to Harry Potter and pop culture in general even if they were maybe a little too frequent. I also liked the fact that friendship was just as important as romance in the lives of these characters – that felt real and provided a break from the romantic hurdles.

Overall I think a lot of people will love this book even though it wasn’t quite my cup of tea. The melodrama and teenage angst just got a bit much for me personally but there was enough I liked about it that I definitely don’t regret reading it. If you are a fan of young adult or romance then I think it’s worth giving What If It’s Us a shot.

I received an e-arc of this book from Netgalley. My review is completely honest and unbiased.

🌞Last week I took part in the @tandemcollectiveuk readalong of the gripping 𝕊𝕦𝕟 𝔻𝕒𝕞𝕒𝕘𝕖 by @sabinedurrant and I couldn’t resist an extra little post about it today! I really enjoyed this book! The blurb doesn’t give much away about what the real story here is but I kind of loved that - it gave the book an unexpected and surprising twist which I thought worked really well! The characters and relationships are compelling and it has a fabulously atmospheric sense of setting! If you’re looking for an intense summer thriller - I would highly recommend Sun Damage! 🌞 @hodderbooks 🌞 𝖺𝖽 𝗉𝗋 𝗉𝗋𝗈𝖽𝗎𝖼𝗍 🌞
Hello! Hope you’re all doing ok! I’m still coping with covid and feeling pretty rough but hopefully it’ll improve soon! And I’ve got my books and my dog, Lottie, to keep me company. Today I’m featuring 𝐓𝐡𝐞 𝐏𝐚𝐫𝐭𝐢𝐬𝐚𝐧 𝐛𝐲 𝐏𝐚𝐭𝐫𝐢𝐜𝐤 𝐖𝐨𝐫𝐫𝐚𝐥𝐥 which sounds absolutely fantastic and I’m going to read it as soon as I’m feeling better - I can’t wait! ❤️ Huge thanks to Thomas at @penguinukbooks for sending me a copy! ❤️ 𝖺𝖽 𝗉𝗋 𝗉𝗋𝗈𝖽𝗎𝖼𝗍 ❤️
Today Is my spot on the blog tour for the compelling 𝔸 𝕂𝕚𝕤𝕤 𝔸𝕗𝕥𝕖𝕣 𝔻𝕪𝕚𝕟𝕘 by Ashok Banker! Read on or head to my blog for my review! ❤️ Huge thanks to Ella and @michaeljbooks for this gorgeous proof and having me on the tour! ❤️ 𝚊𝚍 𝚙𝚛 𝚙𝚛𝚘𝚍𝚞𝚌𝚝 ❤️
Today is my stop on the blog tour for the hugely enjoyable 𝙻𝚄𝙲𝙸𝙴 𝚈𝙸 𝙸𝚂 𝙽𝙾𝚃 𝙰 𝚁𝙾𝙼𝙰𝙽𝚃𝙸𝙲 by Lauren Ho! Read on or head to my blog for my thoughts! @harpercollinsuk @randomthingstours ❤️ 𝚊𝚍 𝚙𝚛 𝚙𝚛𝚘𝚍𝚞𝚌𝚝 ❤️
Hello! I hope you’re all doing ok today! I had a busy day out meeting a friend yesterday so just having a chilled time today. I’ve been reading Sun Damage by Sabine Durrant which I’m loving so far!
I want to say a huge thank you to the lovely people at @canongatebooks for sending me this stunning edition of 𝒯𝒽ℯ 𝒢𝒾𝒻𝓉 ℴ𝒻 ℛ𝒶𝒾𝓃 by Tan Twan Eng! It is part of The Canons set: ‘The Canons are books without boundaries. Some are classics already, the rest will be soon.’ I can’t wait to read this beautiful sounding book and I think I’m going to have to start collecting The Canons now too! 💙 𝘢𝘥 𝘱𝘳 𝘱𝘳𝘰𝘥𝘶𝘤𝘵 💙