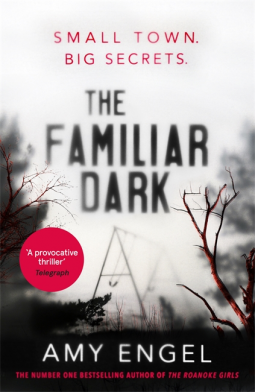 ‘In other places, the murder of two little girls would have blanketed the entire town in horror. Here, it was just another bad day.’

Eve Taggert’s life has been spent steadily climbing away from her roots. Her mother, a hard and cruel woman who dragged her up in a rundown trailer park, was not who she wanted to be to her own daughter, Junie.

But 12-year old Junie is now dead. Found next to the body of her best friend in the park of their small, broken town. Eve has nothing left but who she used to be.

Despite the corrupt police force that patrol her dirt-poor town deep in the Missouri Ozarks, Eve is going to find what happened to her daughter. Even if it means using her own mother’s cruel brand of strength to unearth secrets that don’t want to be discovered and face truths it might be better not to know.

Everyone is a suspect.

Everyone has something to hide.

And someone will answer for her daughter’s murder.

The Familiar Dark follows Eve, a young mother whose 12 year old daughter is violently murdered at the beginning of the book. Eve deals with this inconceivable loss with a singular determination to find out the truth of who killed her daughter and why. It is an intense, devastating and brilliantly written thriller that at it’s core is about motherhood and the strength, but also the darkness that can be drawn from it.

This is the kind of book which almost demands to be read non-stop. I finished it in less than 48 hours because I became so involved in Eve’s reckless and dangerous search for her daughter’s killer. Eve is a fairly harsh character, who has lived through a harrowing childhood with a violent, cruel and uncompromising addict mother. However I immediately liked Eve and respected the way she created a different life for her own daughter despite still living with money problems and numerous challenges. It makes her grief for her child all the more gut-wrenching because her love for Junie is so obviously all-consuming. Her entire life is about her child and once Junie has been brutally taken from her she falls back into the darkness of her past and merciless way she was raised.

Engel writes in an incredibly atmospheric way. The small and appropriately named town of Barren Springs is completely brought to life, showing it’s harsh reality but also the love and tight sense of community that is also present. Engel writes intelligently about the class lines, drugs, judgements and also the stereotypes many people believe about places like Barren Springs. Every character is compelling and intriguingly layered. This is not a cheerful read, but it is such a human and piercing look at the limits of love and loyalty, which will find it’s way right into the mind of it’s reader and stay there.

2 thoughts on “The Familiar Dark by Amy Engel – Book Review”