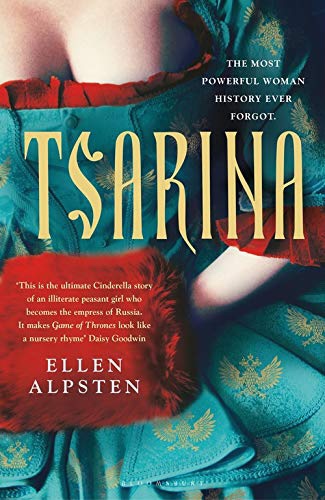 Spring 1699: Illegitimate, destitute and strikingly beautiful, Marta has survived the brutal Russian winter in her remote Baltic village. Sold by her family into household labour at the age of fifteen, Marta survives by committing a crime that will force her to go on the run.

A world away, Russia’s young ruler, Tsar Peter I, passionate and iron-willed, has a vision for transforming the traditionalist Tsardom of Russia into a modern, Western empire. Countless lives will be lost in the process.

Falling prey to the Great Northern War, Marta cheats death at every turn, finding work as a washerwoman at a battle camp. One night at a celebration, she encounters Peter the Great. Relying on her wits and her formidable courage, and fuelled by ambition, desire and the sheer will to live, Marta will become Catherine I of Russia. But her rise to the top is ridden with peril; how long will she survive the machinations of Peter’s court, and more importantly, Peter himself?

Russian history has always fascinated me so I was dying to read Tsarina as soon as I heard about it. It tells the story of Catherine I of Russia, the second wife of Peter the Great, and not to be confused with Catherine the Great. Her story is one of those that is so extraordinary, it truly reinforces the saying ‘truth is stranger than fiction’. Tsarina is a fictionalised version of this woman’s life but as far as I can tell it appears to be pretty accurate, only inventing where the history is genuinely too murky to establish the facts. Catherine I began her life as Marta, a serf in the baltic region and through a series of struggles, skilful machinations and sheer willpower rose to become the wife of one of Russia’s most famously mercurial rulers and even ruled over Russia herself for a short period. It is, to put it simply, one heck of a story.

I do have to say straight off that Tsarina is not for the faint-hearted. There is a great deal of brutality and violence so please do take that into account if you have any triggers. Marta led a life full of drama and often, sadly, pain. By the time I had read about one third of Tsarina, I felt like she had already lived ten lives. She goes through a lot and is victimised frequently. However, saying that, Marta seldom actually feels like a victim. No matter how horrific the situation, she manages to get through it with an incredibly admirable fortitude and pragmatism. Throughout her story she truly experiences life right at the bottom, in the depths of poverty and life at the very top with the ostentatious wealth that comes with being royalty. She manages to keep her wit, courage and perceptiveness which makes her more than a match for people around her who have had the benefit of a full education in a way Marta never did. I loved that about her and it makes her easy to root for throughout the whole book.

Marta’s relationship with Peter the Great is the central one in Tsarina. Alpsten brings the intimidating historical figure to life in a way that feels authentic. He is passionate, determined and lives with an almost singular purpose of making Russia the way he believes it should be. The flip side of Peter, however, is less than pleasant. He is violent, authoritarian and often completely without mercy. It is testament to Alpsten’s skill that he comes across as a three dimensional man and not as either an outright hero or simply as a tyrannical villain. Peter and Catherine (as she is named after they become involved) have an intense relationship. She is one of the very few who seems to have some sway with Peter and often uses it intelligently and occasionally ruthlessly. Despite this, Catherine is in the unfortunate position of being a woman in a world where men have all the power. The way women are often treated in Tsarina is shocking but depressingly accurate to the era. No matter how cunning Catherine is, Peter holds all the cards, his word is law and thus theirs is a union that can never truly be equal. Catherine is conspicuously aware of this and it is mainly by sheer force of will that she manoeuvres a life with a man so incendiary.

Tsarina is an epic work of historical fiction which is written in a way that feels so evocative and devastatingly real. The prose is beautifully descriptive and Alpsten is particularly adept as breathing life into the food, landscape and fashions of the era. Tsarina is quite long but it never lags, keeping up a relentless pace of intrigue, suffering, passion and ruthlessness. It is a wild and brutal ride of a book that I was left thinking about long after finishing. Highly recommend.

Thank you so much to Anne Cater of Random Things Blog Tours for inviting me on this tour and organising it. I received a e-copy of the book from the publisher. My review is my own honest opinion. 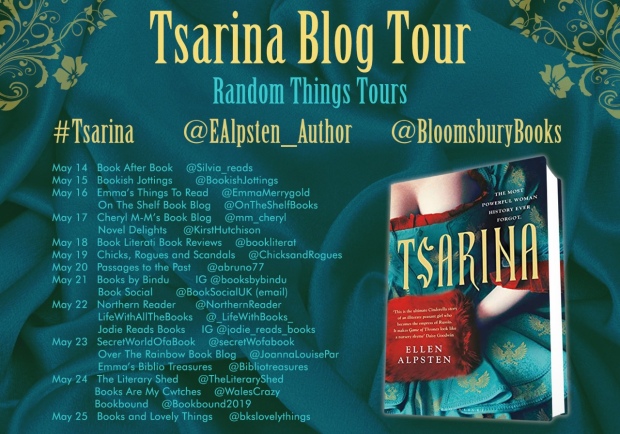