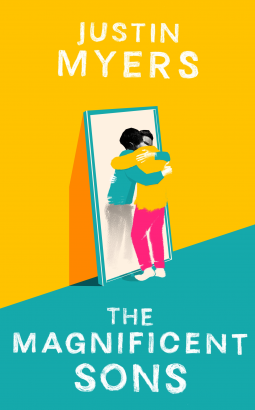 Jake D’Arcy has spent most of his twenty-nine years trying to get his life just right. He’s nearly there: great girlfriend, great friends, stable job. A distant relationship with his boisterous family – which is exactly the way he wants it. So why does everything feel so wrong?

When his popular, irritatingly confident teenage brother Trick comes out as gay to a rapturous response, Jake realises he has questions about his own repressed bisexuality, and that he can’t wait any longer to find his answers.

As Trick begins to struggle with navigating the murky waters of adult relationships, Jake begins a journey that will destroy his relationship with girlfriend Amelia, challenge his closest friendships, and force him to face up to the distance between him and his family – but offers new friends, fewer inhibitions, and a glimpse of the magnificent life he never thought could be his.

I really enjoyed Myers’ debut, The Last Romeo, so I was really looking forward to reading The Magnificent Sons and it didn’t disappoint in any way! The story follows Jake, who feels like an outsider in his family and carries a feeling of uncertainty in himself regarding his life and his sexuality. He decides he has to give himself the chance to be who he is meant to be which brings up multiple issues with the people he is closest to and a new twist in his relationship with his boisterous and complicated family.

I found The Magnificent Sons to be a really fun and insightful read. Jake is a character that is not perfect, he makes mistakes and says the wrong thing on plenty of occasions and is at times difficult to like, but this is what makes him feel real and like a rounded person trying to figure himself out. He is approaching his 30th birthday and I can totally relate to the stage he is at in life, being 28 myself, when it feels like everyone is pairing off, getting married and having kids. It is a difficult age! Jake has struggled with his attraction to men his entire life and his relationship with his family and particularly his, seemingly overconfident gay brother is strained to say the least. He feels like the odd one out around them and this causes him to isolate himself in a way. This is part of what he has to try to comprehend on the journey he is on in The Magnificent Sons and it’s one of the most emotional and moving parts of the story.

The Magnificent Sons is made up of a cast of colourful and fascinating characters. I particularly liked Amelia, Jake’s girlfriend, who could easily have been a two-dimensional obstacle to him realising his own sense of self, but is actually a funny, smart and incredibly likeable character who was a firm favourite of mine throughout the book. This is a sharp and funny read but there is also a real emotional resonance to it. I cannot pretend to understand what it is like to grapple with the complexities of coming out as bisexual but there was a rawness and honesty to this book that I felt was sensitively manoeuvred and I was thoroughly moved by it at times. Overall, a snappy, witty and touching read.

3 thoughts on “The Magnificent Sons by Justin Myers”